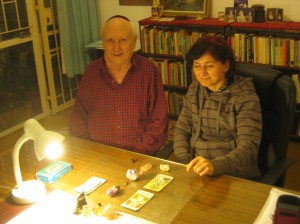 My long search for the fundamental answers about life, lead me beyond the ocean as far as the Republic of South Africa. There I met the spiritual teacher, who has had the greatest influence on what spirituality unfolded for me. It was Mr Ivan Kaplan in Johannesburg. Ivan was born in Johannesburg, and his grandparents originated in Lithuania where one of his grandfathers was a follower of the Esoteric Chasidic Jewish tradition.

He was raised in a religiously observant Jewish family, and the interests of his parents were inclined to deeper spiritual philosophy, than what was traditionally accepted in those days. From his teens, Ivan was delving, reading and participating in esoteric discussions and lectures.

For two years he studied medicine at the University of Witwatersrand, then became more specialized in the Natural Sciences and finally graduated from the Johannesburg College of Education. He was a Head of Department of several High Schools for most of his twenty-nine year teaching career. Nevertheless, his interests and engagement in New Age societies continued.

In 1976 he found himself commited to teaching meditation and personal growth to groups, in his free time, whilst still practicing education in schools. In 1987, his present calling became a full time occupation. He has already trained more than six thousand five hundred meditators. He has since 1966 been devoted to the most rewarding practices of Yoga and meditation for several hours each day.

Thanks to South Africa being a cosmopolitan country, with a large Indian community (for example Mahatma Gandhi lived there for 22 years, defending the interests, as an advocate of  the Indian minority), a number of outstanding Indian, Buddhist and other spiritual teachers, have lived or visited this country. There are many aspirants in South Africa, who have been most privileged to have been exposed to authentic Yoga and spirituality, without necessarily having to travel to the East.

A few of a number of teacher he had and who were the most significant influences on his spiritual teaching are Rosa and Bill Parvin, Sufi leaders of the Hazrat Inayat Khan Order of South Africa, and who were also talented psychics. He was a disciple for many years of a God-realized and most extraordinary Christian mystic and healer, Mrs. Ethel Robertson of Johannesburg. Swami Shivananda Navalar, a Master of the Breath in Durban, and teacher of the South Indian Yoga Tradition of Ramalinga also trained him. Yogiraj Mani Finger in Johannesburg, a disciple of Paramahansa Yogananda – author of Autobiography of a Yogi, initiated him into Kriya Yoga and advanced Tantric meditation techniques, which Ivan still highly values, practicing and teaching them to this day. Gururaj Ananda Yogi of Cape Town in 1976, which was the catalyst, that prevailed upon him to teach meditation, Yoga and spirituality. Paramahansa Yogananda and the Mahavatar Babaji, have been the main foundations of the courses he facilitates.

Ivan has done many silent retreats, especially at the Buddhist Retreat Center of Ixopo, in Kwazulu Natal, hosting outstanding Meditation Masters from Asia. His most revered Buddhist Master is the late Godwin Smararatna of Sri Lanka.

Kabbalah, the secret teaching of the biblical authors and prophets, has been integrated into his courses. Having had a Hebrew and Jewish education, he is able to train his meditators to decode the original Hebrew text of the Bible, using the rules of the Talmud for mystical interpretation.

Thanks to an incredible breadth of his horizon and the depth of his knowledge, Ivan is one of the best spiritual teachers alive.

Immensely important to me is, among other things, his contribution to religious tolerance, since few people in this world are capable of proving so clearly the common essence of all the major religions, thus revealing the utter futility and absurdity of religious dogma. Meeting my spiritual teacher has been a great blessing and one of the most important milestones in my life.

In 2011 I was honoured to introduce my girlfriend Lenka to Ivan during our visit and she too has accepted him as one of her most significant spiritual teachers.